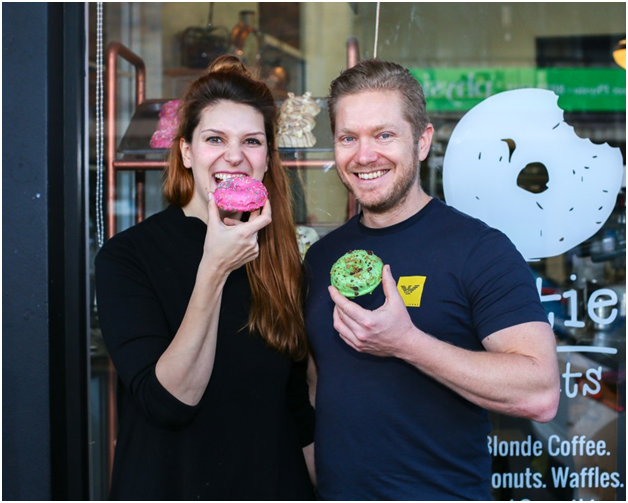 On Sunday March 22nd, 2020 the government of NSW announced pubs, clubs, gyms, cinemas and places of worship would be shut from midday on Monday 23rd, while restaurants and cafes would have to switch to takeaway only to help to curb the spread of the covid-19 virus. Gatherings of more than two people were prohibited.

Nutie was founded by Sina Klug and Jacques Dumont. Sina was serving customers at the time of the announcement and everybody in the shop was crying. It was time to innovate. That night Sina and partner Jacques Dumont put signs in their shop windows with their phone numbers which said, “Text us for anything you need” and went home determined to find a way to trade through the restrictions.

The next morning Sina and Jacques arrived at the kitchen to be greeted by 10 pastry chefs crying. Nutie’s team of 20 are mostly international pastry students. They fully expected to be let go but Sina told them “Not on my watch”. Sina and Jacques knew that if they closed the business their staff would have no income and would not be entitled to any government assistance. They also knew that many of Nutie’s celiac customers relied on them. This was especially true of returning international travellers who were now subject to a mandatory 14-day quarantine.

On the first day of the lockdown Nutie did home delivery for the first time. The menu was not  only their cakes but vegan and gluten free meal packs for lunch and dinner. Jacques father bought ingredients from the local supermarket , meals were cooked in the kitchen and sold at cost price. Deliveries were made in Nutie’s own van. Home delivery helped keep Nutie’s regular customers connected to the business and their staff employed even though the profitability was questionable.

Initially all the orders were being received by email as Nutie had no web site. Sina came home in the evening, collated the orders, entered the data in to a spreadsheet then plotted a delivery route for their drivers. This process was tremendously time consuming and inefficient so a friend who was a web developer created a simple online ordering tool. This provided an interim solution while a web site went in to development

The next innovation was delivery routing. Orders were being received not only from their local trade area but from all parts of the 12,368.2sq km of greater Sydney and beyond. Rather than disappointing customers who lived too far away to be economically viable to serve they decided to bundle deliveries to a point and get customers in the surrounding area to come and pick up from the van. Because of social distancing protocols the queue to pick up orders from the van was often 50 to 60 metres long. The furthest delivery of this kind they did was to Canberra some 300km from their kitchen. As ordering patterns developed, they created a schedule to deliver to inner Sydney every day , the rest of Sydney once or twice a week and the more remote locations less frequently.

In the meantime the Nutie web site (https://www.nutie.com.au/) was launched and Sina and Jacques began digital marketing for the first time. One of the main methods of promotion was through social media particularly Facebook and Instagram. They discovered that Facebook has a number of suburb and regional based celiac groups. If a delivery was coming up to one of those areas Nutie would send a message and ask the group to tell their friends. This was very successful in generating new customers.

The innovation continued with the menu. Sina and Jacques decided to productise some of the popular menu items from the café. That means you can now order a vegan and gluten free pancake mix, a drink mix called “Mylie” (Australians might be able to guess the flavour) and other café items online. Additionally they started partnering with other small businesses and adding their products to the menu. One business they partnered with was Mae Thorani (https://www.maethorani.com/) that sell indoor plants. Sina and Jacques saw partnering as a way of helping out fellow small business owners and having a bit of fun. The Mae Thorani plants were offered at checkout with the tag “Add a plant friend, it’s almost like going carbon neutral”. Hundreds of plants were sold.

Sina feels that an important reason Nutie were able to pull off so much innovation so quickly during the covid-19 restrictions was the culture of innovation they had fostered in their team . Nutie have an innovation day in their kitchen every week. Everybody is encouraged to come up with new product ideas and there are prizes for the winners. At first the team were cautious about being too adventurous because they were worried about the cost of wasting ingredients. Once they realised it was OK to try new ideas the team became excited about the opportunity to be creative and being able to contribute their ideas to the business. Sina thinks this can-do, creative spirit in the team has now become a way of doing business for Nutie.

Despite the fact that Nutie’s events business was non-existent and the wholesale business severely diminished during the period of covid-19 restrictions revenue increased (by quite a lot). Rather than lose staff they hired three extra to keep up with the increased volume of sales.  As restrictions ease the plan is to expand. First priority is a bigger kitchen then new café sites and some work on margins.

When the time comes to innovate Sina and Jacques believe the biggest advantage small retailers have is that there is no chain of command. They can enforce change within the same hour if they think it is the right thing to do in contrast to the corporate environments in which they have both worked where simple changes could take 6-7 weeks to implement.

Another advantage in being small is that Sina and Jacques can both do all the jobs in the business. This means they are good judges of which innovations will work and which won’t. That makes for quick, quality decision making which again contrasts with their experiences in the corporate world.

Sina and Jacques have different backgrounds but make a good team. Sina describes Jacques as a free spirit. He has a property development background and has always wanted to start his own business. Sina has always been community orientated , interested in baking and caring for people. The difference works. In over three years living and working together they are yet to have their first argument. There is certainly no argument about what a great job they have done in innovating during the covid-19 lockdown.